About the Kansas City Chiefs

One the most famous landmarks of Kansas City, Arrowhead Stadium is home to the Kansas City Chiefs Football Club. The third-largest venue in the NFL, Arrowhead Stadium boasts one of the best atmospheres in all of sports and is regarded as the loudest in the NFL. Arrowhead is a tailgater’s paradise.  The Chiefs have called Kansas City their home since Founder Lamar Hunt relocated the organization to Mid-America in 1963. Just eight seasons later the Chiefs earned the title of World Champions after their victory in Super Bowl IV. The Chiefs are now under the leadership of CEO Clark Hunt, General Manager John Dorsey, and Head Coach Andy Reid. 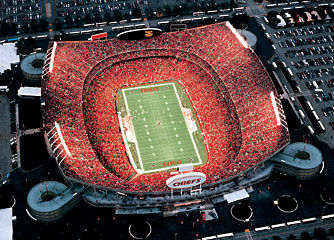 360Directories Made with Love